In Search of the First People

"Pamahsawuh" --the created world and everything in it.

All that we know about the first people of Virginia has come from studying the traces they left behind. Archaeologists have discovered many cave shelters and mounds, hundreds of villages, and thousands of objects. They know there is much more to be found. Throu 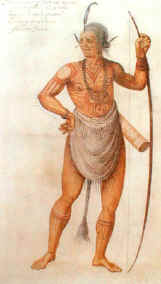 gh patient work in the field and the lab, archaeologists have reconstructed some of the history and lifeways of the early Indians. A clear picture of how Virginia Indian cultures survived and adapted to changing environments emerges from these findings.

Sometime before 12,000 B.C., Asians stood at the brink of a pristine, uninhabited New World. They crossed the largest frontier ever traveled. As one scientist observed, "Not until the human race occupies another planet will we explore a domain so vast." Before the Pyramids were built in Egypt or the Great Wall of China was laid, these people journeyed to the outermost reaches of the territory before them.

From the Bering Strait, through Canada, and across the Great Plains, they arrived in Virginia long before there was even a Chesapeake Bay. Here, the early Indians adapted over many generations to changing environments, responding to their world and finding that it, in turn, responded to them.

The first people molded their lifestyles to their surroundings and the seasons. From scientific findings, we know they dealt with years of drought, glacial advances, and retreats; the birth of a vast bay, rivers, and forests; the death of huge herd animals such as the mastodons and mammoths.

To survive these changes, the Indians made all the tools, weapons and materials needed to sustain themselves. They invented atlatls, pottery, and celts. They hunted animals for food, tools, shelter, and clothing. Over time, the first people's use of plants--for containers, fish weirs, cloth, medicine, housing, and canoes--became increasingly sophisticated.

The descendants of these Native Americans were members of distinct tribes. The tribes spoke many different languages and dialects and held many different beliefs and traditions. Indians from three different language groups lived in Virginia at the time of European contact: The Powhatan, Pamunkey, Chickahominy, Mattaponi, and Nansemond were some of the members of the Algonquian language group. The Monacan, Manahoac, Saponi, Tutelo, and Occaneechi were Eastern Siouan speakers. Iroquoian speakers included the Meherrin, Nottoway, and Cherokee.

Each village was the center of the Indian's life. A tribe's sphere of influence grew as villages formed and broke alliances and established networks for trade. From 10,000 B.C. to A.D. 1600, the Indians of Virginia evolved from nomadic hunters to settled village farmers, from equal partners in small bands, to members of elaborately organized chiefdoms.

At the height of their population, an estimated 50,000 Indians lived in Virginia at thousands of sites along the rivers and the coast. In 1677, a treaty between the Indians and the English forced the Indians to give up their vast lands and agree to become British subjects. The Indians promised to assist the English with their wars, learn the English language, and pay an annual tribute to the Governor. By the late 19th century many reservations were divided and sold because the tribes needed money. The Pamunkey and Mattaponi tribes were able to hold onto their lands. 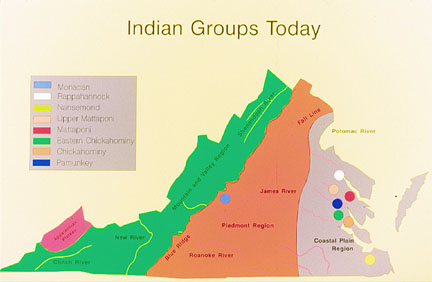 Today, about 2,500 people of Indian ancestry live in Virginia as members of original tribes. Their names are entered on the tribal register at the age of 16, with their solemn pledge to uphold the traditions of the tribe. Census figures hold that 15,280 more people of Native American ancestry live in urban areas, such as Tidewater, Northern Virginia, Roanoke, and Richmond. Eight organized Indian groups together make up one of the largest populations of Native Americans on the East Coast. These include the Pamunkey and the Mattaponi, two tribes in King William County. Their state reservations date from the 1600s. Six other incorporated groups are officially recognized as Indian tribes by the State of Virginia. They are all from the Algonquian language group except for the Monacan.

The tribes include the:

The two reservation Indian groups, the Mattaponi and the Pamunkey, have maintained their tribal identity throughout the course of their history. Since their treaties of 1658 and 1677, these two tribes have been recognized and treated as wards of the Commonwealth. The non-reservation communities began reorganizing in the late 1800s. In the last 100 years, new self-images have emerged among the people as they arrived at a balance of the old and the new in their lives.